Box Elder bugs, while they are harmless to humans they can cause some major issues in and around the home. They are considered nuisance bugs and are known for popping up in large numbers. Lately, we have seen a number of rising Box Elder bug infestations around Coon Rapids, Anoka, and Blaine, MN. This is because winter is coming and their search for warmth and survival just happens to be in your home. At Eco Tech, we are your area’s greatest asset when it comes to getting rid of these creepy crawlers. If you have a Box Elder bug problem, Eco Tech can help.

In Minnesota, boxelder bugs emerge from overwintering sites during spring as the brutal winters shift into sunnier days. The adults will be in search for low vegetation and seeds on the ground during spring and early summer, and begin mating a couple weeks after they started feeding. In mid July the females need to find seed-bearing boxelder trees (hence how they get their name) where they lay eggs on the trunks, branches and leaves. They are rarely found on male boxelder trees, and sometimes Boxelder bugs also feed on maple or ash trees. Boxelders do not harm any trees as we know and are part of the functioning ecosystem.

When the weather shifts again and the fall sets in, boxelder bugs start to leave the trees from where they were laying eggs and feeding to find protected areas for the winter. Although nymphs may be present in the fall, only fully grown adults survive the winter. During this time boxelders will become attracted to homes to find warmth.

Box elder bugs are commonly found in Minneapolis and the surrounding suburbs. Wherever box elder trees as well as maple trees reside, the Box elder bugs will follow. In the warmer months, these bugs hang out on trees, bricks, decks, siding, etc., so they can get direct sunlight. During the warmer months of the year, these pests lay eggs, causing more and more Boxelder bugs to hang around your property. The real issues occur when the winter months hit. Often times, Boxelder bugs enter into homes through the tiniest holes or cracks and get into the walls of your home to help insulate and keep themselves warm during the colder months of the year. Next thing you know, your home has been infested with Boxelder bugs. Rather than trying to remove these unwanted pests on your own, leave it up to our experienced team at Eco Tech. 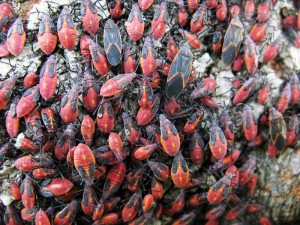 Box elder bugs are common throughout Minnesota. They are black in color and are worked by red lines along their back and sides. Their wings are flat and red in color and they usually grow between 11 to 15 mm in length.

Although they may seem common all the time, in actuality box elders do not nest indoors year-round. They make their homes in box elder, maple and ash trees during warmer seasons and migrate into buildings and homes to find shelter from the cold. Due to the cold temperatures in Andover, Coon Rapids, Oak Grove and Ham Lake, Minnesota it is common to have box elder bugs nest in your home. Oftentimes, when the weather cools off, the bugs will sense the warmer temperature and make their way indoors and usually in areas of a structure’s walls. Although they do not cause damage to buildings, their droppings are unappealing and can leave stains on furniture, carpet, clothes and other fabrics.

Boxelder bugs are common pests over much of the United States. Adults are about 1/2 inch long and are bright red or black with red lines down their back. Box Elder bugs are a common insect found in Minnesota and are often a common problem, especially during the spring and early summer.

These insects feed primarily by sucking juices from the box elder tree, but are sometimes found on other plants.They do very little damage to the trees they attack, but at certain times of the year they can become a nuisance. Box elder bugs develop by gradual metamorphosis, from egg, to nymph, then to adult. Adult box elder bugs enter homes and builders throughout the year trying to find shelter. They are small and can fit through small cracks, under windows and around the foundation. Oftentimes you will not even realize you have an infestation because they will lay quiet throughout the winter until the sun comes out and they come out to soak up the heat.They will then emerge in the spring to seek out host trees on which to feed and lay eggs.

While most Minnesota residents welcome the fall with open arms and a rake, a few of our little bitty residents scramble to find warm air and protection from the cold winter. Their ½ inch long body leaves its original nesting area in the trees and struts it’s black body with orange or red markings into all sorts of different cracks and spaces around the home.

« Older Entries
Next Entries »
Have A Pest Problem?